Western Australian police have released some new information and guidelines on LED light bar laws, which will make many fall foul of legality.

LED light bars have become a hugely popular form of auxiliary lighting on 4X4s over the past few years, and it has caught legislation on the hop. Recently, Queensland and South Australian road authorities have made amendments to the LED light bar laws, to allow the fitment of light bars on places where they were previously illegal. 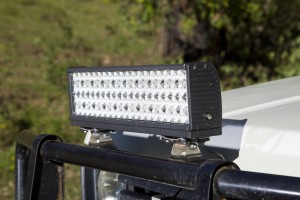 Fitment of a light bar like this in Western Australia isn’t deemed legal.

Not long ago, old laws stipulated that lights had to be fitted in pairs, and fitted equally apart on the vehicle, effectively banning all decent-sized bars being fitted. To clear things up, Western Australian Police have issued an exemption that runs for three years, from 8th August 2015. Light bars are allowed to be fitted, overcoming the laws that didn’t accommodate light bars. But, the new LED light bar laws come with caveats.

The fitment of LED light bars atop the top hoop of your bullbar isn’t illegal, nor is it on your roof rack: